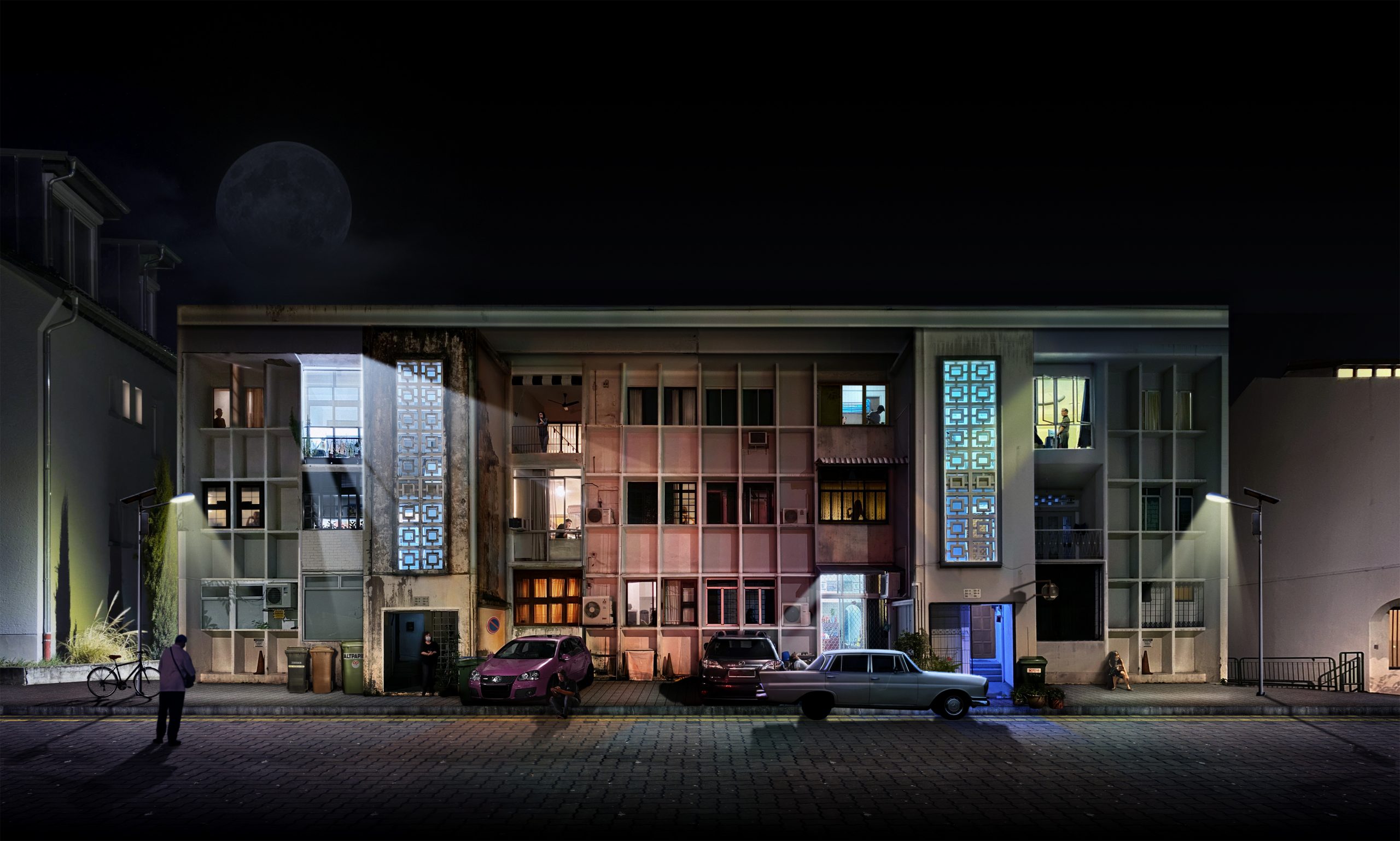 A parallel to her signature style of compositing images, Choo manipulates and reconfigures elusive moments between consciousness, document and space. Formerly a plantation land in Singapore, the area of Emerald Hill was subdivided for wealthy  Chinese and Straits-Chinese merchants at the turn of the 20th Century for their place of abode. A space where families were seen to interact frequently with one another, dwellings were built as terrace houses of a variety of architectural styles ranging from Transitional, Late to Art-Deco; with most independent mansions having been demolished today. Now a conservation site, Emerald Hill houses new businesses ranging from restaurants, bars to small firms. This artwork presents a digital composite of documented moments, recorded during the Circuit Breaker in Singapore as a result of the Covid-19 pandemic. Hovering on the border between objective and subjective, public and private; the image presented is a culmination of momentary openings, pockets in between.

A transitory site, 156 Emerald Hill sets the stage in depicting ignored seams and forgotten vistas, promising a site from which either the utopian or the apocalyptic emerge.

Sarah Choo Jing (b. 1990, Singapore) is known for her interdisciplinary approach to photography, video and installation. Her work depicts identifiable moments and characters within contemporary urban society suggesting a plethora of private and often solitary narratives. The artist is concerned with the gaze of the flaneur, voyeurism and the uncanny.

Based in Singapore since completing her MFA at the Slade School of Art in London in 2015, Choo has since exhibited internationally at the Turku Art Museum in Helsinki (2019), National Museum of Singapore (2017), Busan Museum of Art in Korea (2016), ArtParis at The Grand Palais in Paris (2015), the START Art Fair at The Saatchi Gallery in London (2015) and Photo London at The Somerset House in London (2015). Her works are collected by private individuals and public institutions; including Singapore Art Museum, National Museum of Singapore and The Arts Club Permanent Art Collection in London.

Sarah Choo Jing will be presenting her works at Yeo Workshop.