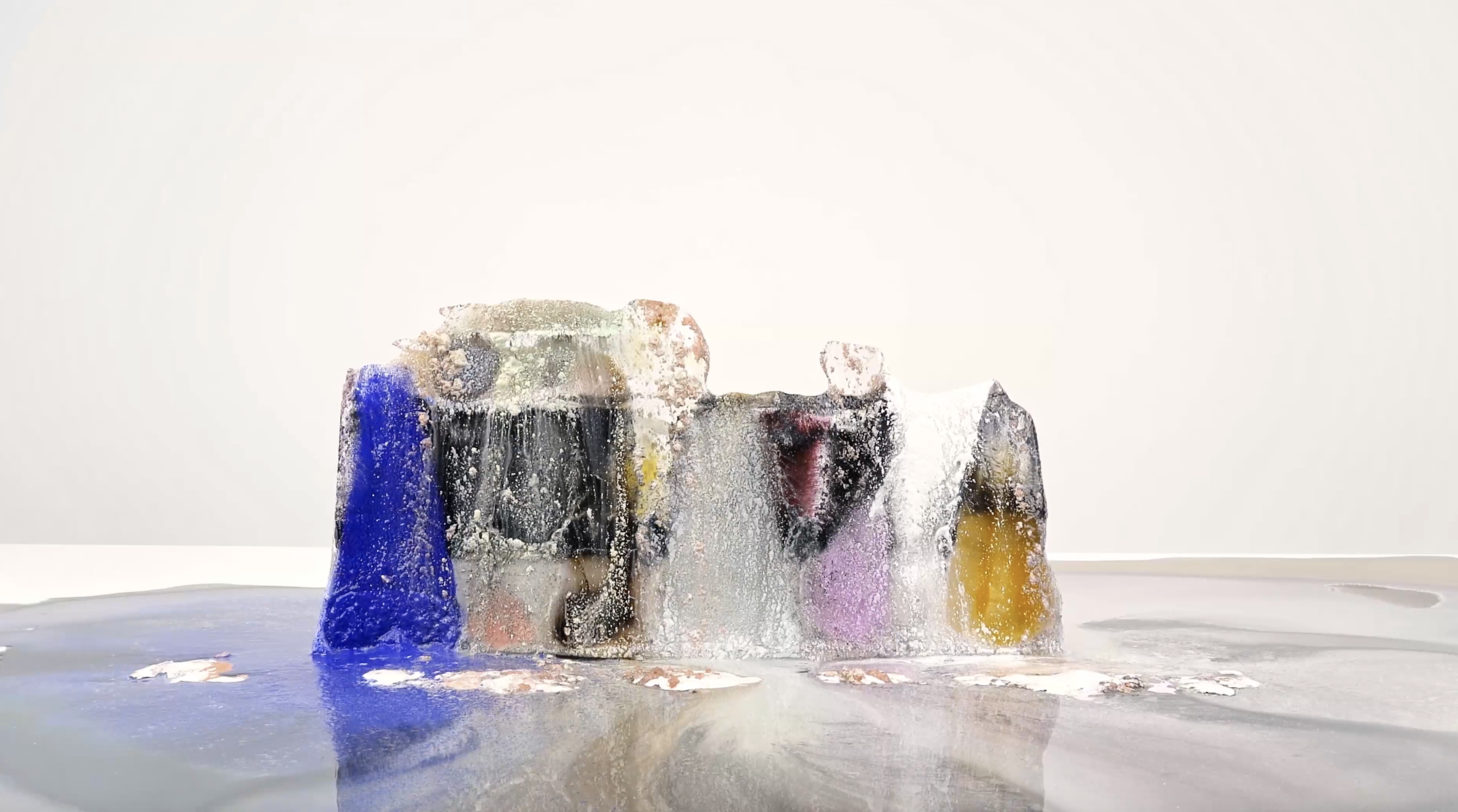 Image courtesy of the artist and Sullivan+Strumpf

Dawn Ng’s latest and ongoing body of work, Into Air, endeavours to grasp time as a colour, shape and form. What started out as a benign curiosity about holding of time in an ephemeral object like ice, grew into a full-blown obsession with creating and documenting the disintegration of large sculptural blocks of frozen pigment, over the past 3 years. Ice is a perfect material because it cannot last. Its metamorphoses from solid, liquid to air, reflects both the arresting presence and passage of cyclical time. Time Lost Falling in Love is a series of time-lapse video portraits, documenting the meditative collapse of large blocks of frozen pigment. Upon building a custom pool set that is able to hold the total liquid volume of a melted block, its start- to-end disintegration is laboriously filmed over the course of 15-20 hours. Post production, the recordings are meticulously edited and compressed. Although time is technologically sped up, the intended resultant languid collapse of rich pigments in the film mirrors the cathartic release of a waterfall in slow motion, suspending time between oneself and a moving image. The singular erosion of these coloured glaciers floods the mind with a sense of beauty and destruction, embodying the full emotional tenor of time which will not last.

Dawn Ng is a multi-hyphenate visual artist, who has worked across a breadth of mediums, motives and scale, including sculpture, photography, light, film, collage, painting and large scale installations. Her practice deals with time, memory and the ephemeral. Her latest and ongoing body of work, Into Air continues Ng’s preoccupation with time and her attempts to capture and convey its emotional tenor and elasticity, as opposed to the cold and factual progression of numerals commonly used to tell and record time. ‘Into Air’ is a ‘cycle’, charting the lifespan of a block of frozen pigments as it is exposed to the elements, melts, and then returns to air. The works are all traces and residues of each block’s existence and record the movement of its states from solid to liquid, and eventually to air: from weight to lightness, monumentality to nothingness.