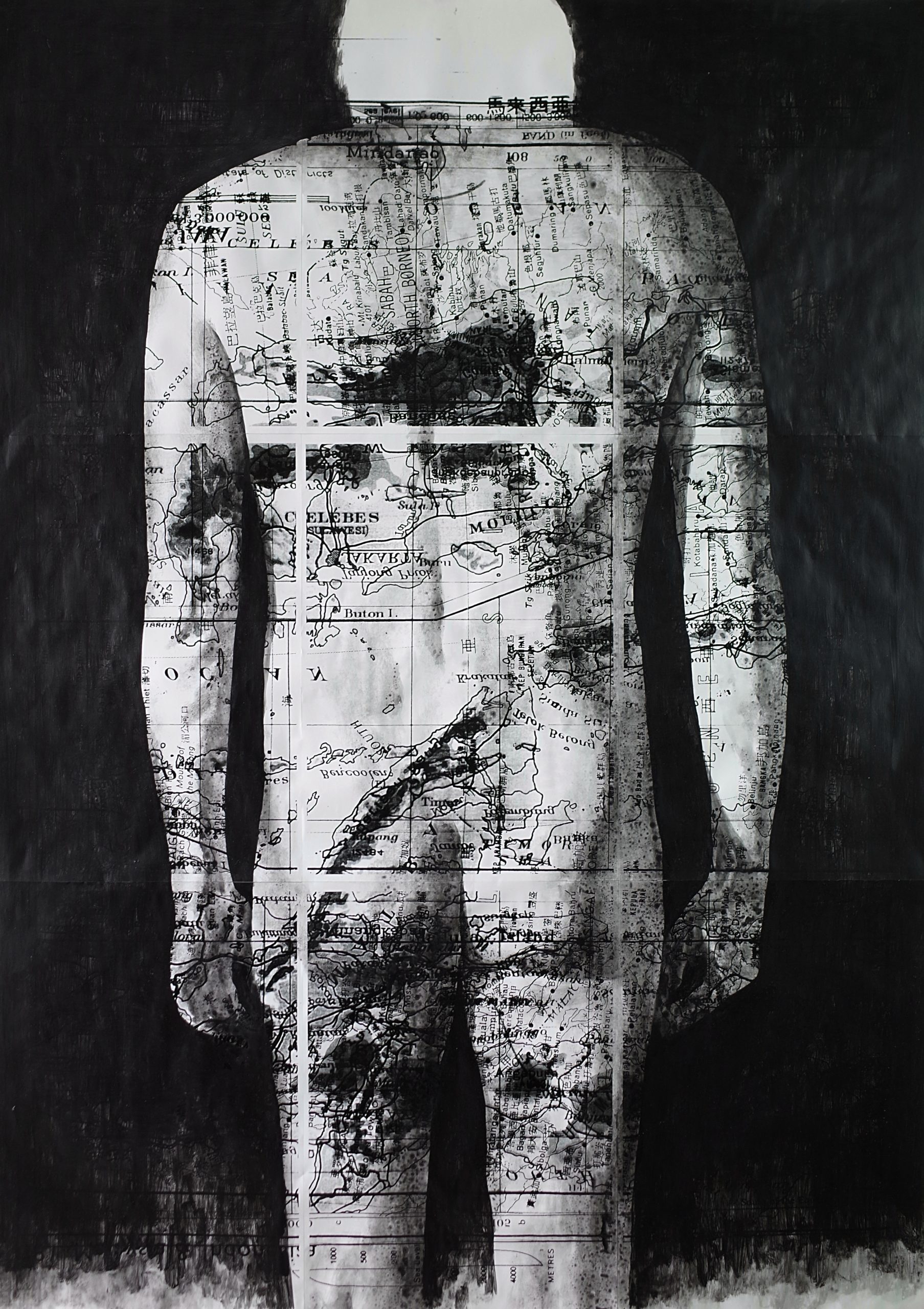 Image courtesy of the artist and A+ Works of Art

In the Body and Borders series, Chong Kim Chiew uses several different maps of Malaya and Malaysia—the map of the Japanese invasion of Malaya in World War II, the Malay Peninsula map, the Malaysia West and East Physical Map, the Malaya and Singapore Physical Railway, the Air and Sea Routes Map, and the Malayan National Liberation Army Military Deployment Map—to form a complete 9-grid work. It is an individual’s exploration of the map as a symbol of the interlaced and complex relationship between individual life and national memory.

These maps are printed above paintings of male nudes, overwhelming them with information spanning the political, the historical, to the issues of borders. Soaking into the porous surfaces of his subjects’ skins, they lose their way in the contours of each body part, engaging in a fluid relationship with the transformative and migratory body whose forms map the various geographies traversed from one’s birth to death.

When the overlapping map is printed on the body, it becomes an indelible tattoo and birthmark where memories, identity, and subjection come into mutual articulation. In this way, Chong appropriates the structuring and knowledge-making role of the map as a way to imagine the permeability of the self onto the private and public. The blood vessels in our bodies—here, lines connoting roads and contours—remind us that movement in life is a slender, flowing journey, and an endless migration.

Chong Kim Chiew (b.1975) is a graduate (BFA, Oil Painting) of the Guangzhou Academy of Fine Art. Chong is an artist and curator who enjoys the openness of art language. Working across different mediums, methods and paradigms, he believes the most critical factor in contemporary art is “attitude”. His installation work comments on the social and political environment of the exhibition sites. Seeing the meaning of materials as linked to the environment, Chong regards materials as being non-static but constantly fluctuating, expanding outwards and prone to misreading.

His work is collected by the Singapore Art Museum. He will be participating in the upcoming 10th Asia Pacific Triennial of Contemporary Art (APT 10) and exhibiting in QAG, GOMA, Queensland Art Gallery and Gallery of Modern Art, Australia from the 4th December 2021 to 25th April 2022.