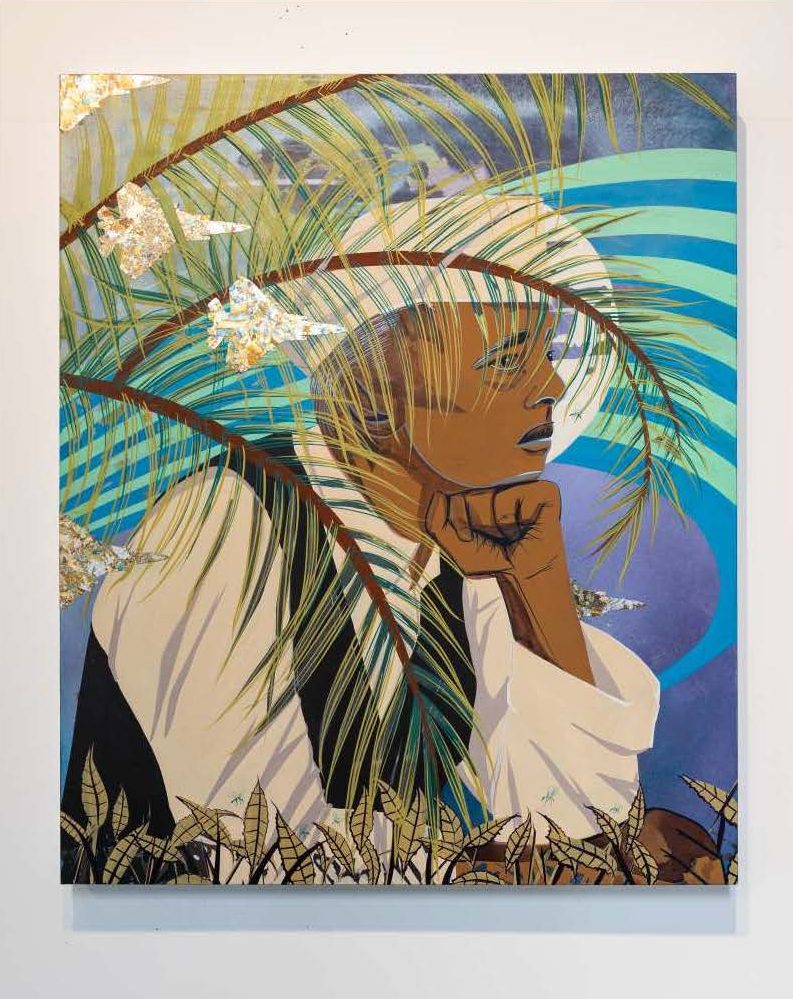 Image courtesy of the artist and Tropical Futures Institute

The images expand on her work inspired by Forest City, a man-made, plant covered, tax-free Malaysian island located in the Singapore Strait between Malaysia and Singapore. Nguyen visited the island in 2019 where a salesperson lauded the sustainable city as a wonderful and luxurious place to raise kids, receive great medicare care, and retire as there was “no climate change” in this utopia. After the trip, Nguyen began to imagine Forest City as an aspirational and utopian nation. Her ﬁrst body of work about this debuted in the Summer of 2020 at her solo show at Smack Mellon in Brooklyn, NY.

Freehold is grounded in Nguyen’s creation of a national ﬂag for Forest City. Throughout the four portraits in SEA Focus, viewers will see a ﬂag spread across the composition. The ﬂag features twelve alternating green and blue horizontal stripes which represent unchanging land and water over the twelve hours of a day. Centered is a big white circle which presents a perfect sun, a source of light and truth. When Nguyen uses this ﬂag by placing it across a subject or weaving it through foliage, the sun, water, and land symbols move and suggest new meaning. These four portraits suggest that while the ﬂag aspires for human perfection, humans and culture constantly agitates this pursuit. As the ﬂag moves around, we see that the circular sun is distorted and the stripes that depict unmoving land and water are in constant motion.

The four people depicted in this series are four imagined military leaders for this fantasy nation of Forest City. But, perhaps most signiﬁcantly, these four leaders were head ﬁgures at the Bandung Conference of 1955 where 29 African and Asian countries convened to denounce colonialism and imagine a world non-aligned with the West. The four leaders in these paintings and their titles during the conference are: Chou En-Lai, the Premier of China; Carlos Peña Romulo, the Secretary of Foreign Aﬀairs of the Philippines; Jawaharlal Nehru, Prime Minister of India; and Gamal Abdel Nasser, Prime Minister of Egypt. All of these ﬁgures played key roles in the dialogues at Bandung and the world speculated on their intentions because of their geographic location, geopolitical stance, and relationships with America and the Soviet Union.

Nguyen folds this history of the Bandung Conference into her imagination of a Forest City nation as a way to probe at the meaning of independence, freedom, and democracy. The Bandung Conference was a failed enterprise and remains an aspirational spirit in history. In these paintings, Nguyen as casted the four leaders as new military heads of a ﬁctitious nation deeply inspired by Forest City, a very real and capitalistic venture. Here, viewers meet: Commander of Sea, Chou En-Lai; Commander of Field, Carlos Peña Romulo; Commander of Air, Jawaharlal Nehru; and Commander of Space, Gamal Abdel Nasser. In doing so, Nguyen prods at what a good civil society should look like and what it really means to be sovereign in a globalized world.

Tammy Nguyen is a multimedia artist whose work spans painting, drawing, printmaking, and publishing. Intersecting geopolitical realities with fiction, her practice addresses lesser-known histories through a blend of myth and visual narrative. She is the founder of Passenger Pigeon Press, an independent press that joins scientists, journalists, creative writers, and artists to create politically nuanced and cross-disciplinary projects. Born in San Francisco, Nguyen received a BFA from Cooper Union in 2007. The year following, she received a Fulbright scholarship to study lacquer painting in Vietnam, where she remained and worked with a ceramics company for three years thereafter. Nguyen received an MFA from Yale in 2013 and was awarded the Van Lier Fellowship at Wave Hill in 2014.

She has exhibited at the Rubin Museum, The Factory Contemporary Arts Centre, the Bronx Museum, Five Myles, and other institutions. Her work is included in the collections of Yale University, the Philadelphia Museum of Art, MIT Library, the Seattle Art Museum, the Walker Art Center Library, and the Museum of Modern Art Library. She is an Assistant Professor of Art at Wesleyan University.