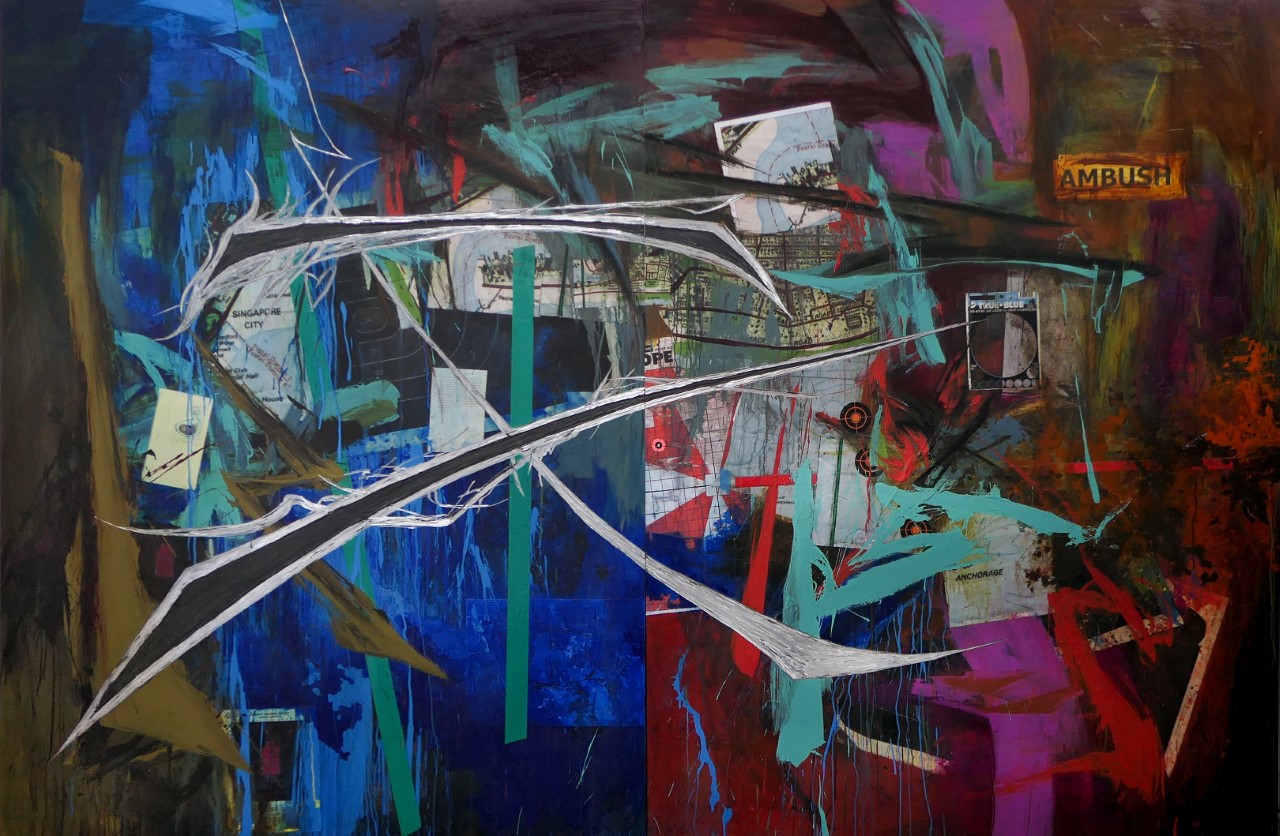 HISTORY KEEPS ME AWAKE AT NIGHT

The piece builds upon the legacy of three works that responded to the 1993 Fort Road Arrests: Josef Ng’s performance ‘Brother Cane’ (1993); Alfian Sa’at’s poem ‘We Are Not Yet Free: A Poem in 12 Strokes’ (2001) where he makes an explicit mention of the arrests in poem number V; and lastly, Boo Junfeng’s short film ‘Tanjong Rhu’ (2008).

As suggested by its title, ‘HISTORY KEEPS ME AWAKE AT NIGHT’ is about the spectre cast by injustices of the past, its unresolved loose ends and ongoing battles. The diptych absorbs elements of its three predecessors through: the use of historical maps, a collage of Sa’at’s book cover ‘A History of Amnesia’ (from a collection which feature the aforementioned poem), and visceral slashes that recall the ferocity of Ng’s whipping gestures. ‘HISTORY KEEPS ME AWAKE AT NIGHT’ is the first monumental painting dealing with this subject.

Ian Tee’s (b. 1994, Singapore) practice investigates the social space of abstraction through questioning surfaces and form. Conflating visual language from the history of painting with the energy of rebellious youth cultures, he is interested in how aesthetic narratives can be reworked and recontextualised. His work manifests in a variety of media— destroyed metal paintings, bleached and dyed textiles, and collage.

Tee’s 'Fire Blanket' series expresses a desire for comfort and protection that is rooted in our intimate relationship with textiles. Its title refers to the woven fibre-glass blankets used to extinguish fires. Here, the material is used to support a patchwork quilt made from fragments of unwanted clothes, scrap fabric and industrial safety materials, such as reflective straps. This is a gesture of recharging and strengthening an object often deemed to be soft and feminine, while recognising the values of care and love embedded in the act of sewing.

Tee graduated with a Bachelor in Fine Arts from LASALLE College of the Arts, Singapore in 2018. He was a recipient of the Ngee Ann Kongsi scholarship and winner of the 2017 Cliftons Art Prize for Singapore. In 2019, Tee presented his first solo exhibition with Yavuz Gallery titled SWEET DREAMS and subsequently; KILL YOUR DARLINGS in 2021.