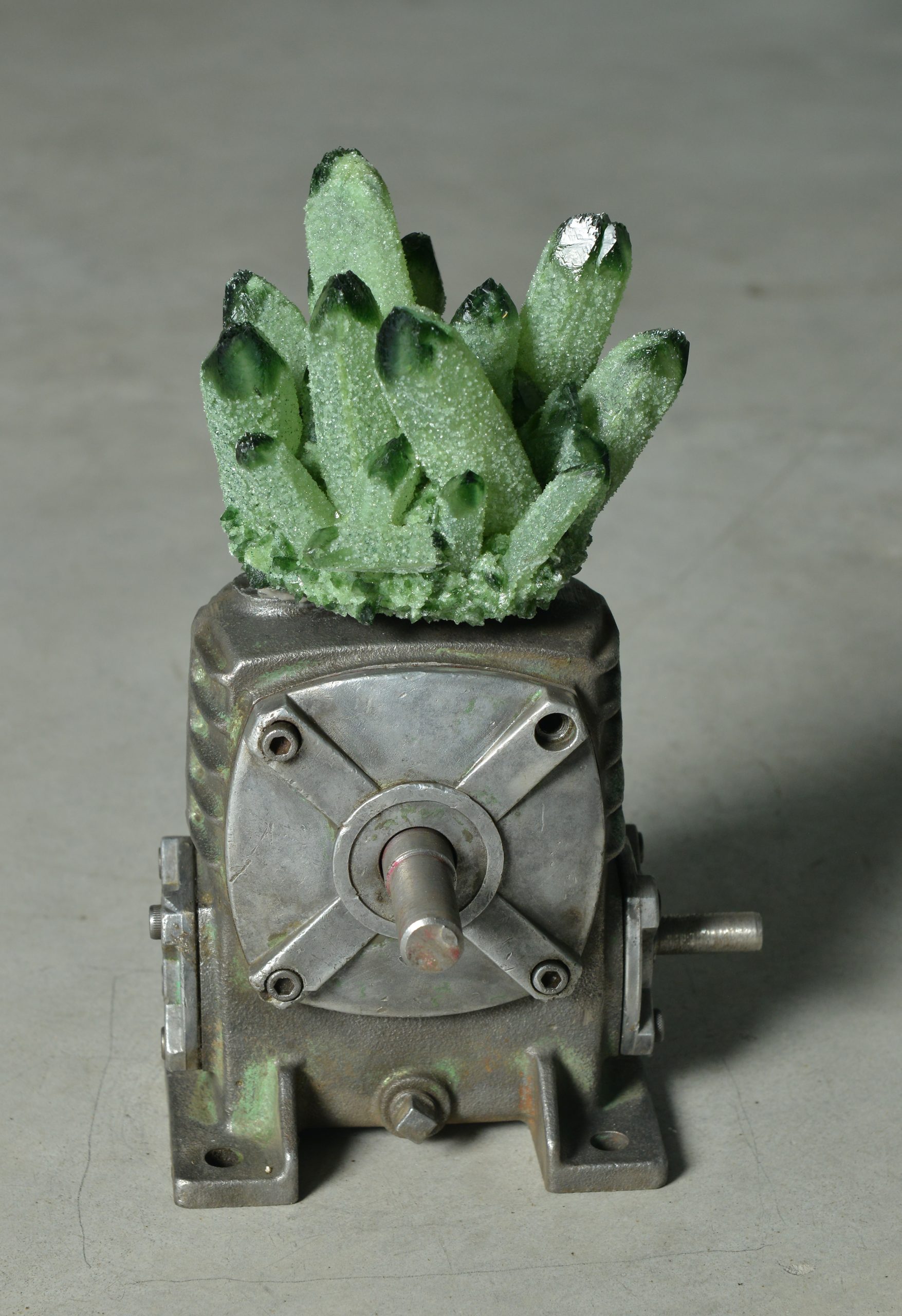 Image courtesy of the artist and CUC Gallery

CUC Gallery, Hanoi, Vietnam is thrilled to present “I am the constellation of my own” series by Vietnamese artist Tulip Duong (b. 1959,Vietnam).

“I am the constellation of my own” series is an installation of sculptures made out of natural quartz and used gearboxes.

Akin to an organism, each sculpture consists of two parts: the lower part is a used gearbox. Its shape, form and color is kept intact; the upper part is a natural quartz. Quartz is a stone of harmony and is helpful in improving relationships. Thus, it contributes to forming connections that are indeed our constellations. The young quartz used in the Hybrid enhances spiritual growth, awareness, wisdom and revitalization, which we as human being need in the context of this current pandemic.

The gearbox is the transmission, an intermediary to increase or decrease the speed of an engine. All of the gearboxes were used and discarded during the most exciting time for the smokestack industry of Vietnam.

These two unique opposite singulars carrying their own histories and strengths were combined to form a hybrid species. While gearboxes are only a few decades old and created by human hands, quartz crystals are the product of Mother Nature that can take thousands of years to formulate. Though these two objects can never seem to go together nor have any kind of relationship, Tulip makes it possible. The artist puts nature (quartz crystals) on top of the product by human(gearbox) to stress the ultimate power of nature over us. This has been proven by how small and vulnerable human beings are when reacting to the on-going impacts of global climate change and the current COVID-19 pandemic.

The 9 hybrid species formed a star map that simulates the Big Dipper, an asterism in the constellation Ursa Major. These star patterns are not random; they express how we choose to align in joining the dots.

Tulip Duong was born and raised in a traditional family but forges an artistic path of her own. Having witnessed the war remnants in Vietnam, the Doi Moi (1986) period and the country's transformation in the process of globalization, her artistic style flowers at the crossroads of history, culture and the breaths of modernity and innovation. Tulip Duong's career featured a unique combination of a mathematician, educator, and market analyst. She ultimately leaves behind everything to follow her calling in art, began to teach herself everything from scratch. Her very scientific background creates a unique vantage in her methodical approach in artistic creations. She often considers a wide range of materials, topics and methods before choosing the main themes for her works and exploring them from many different angles.

Tulip’s artworks constantly evolve and transform, just like the artist’s personality: dynamic  and always striving to push boundaries and limits. If her previous works depict Hanoi in different lights and forms, her recent inspirations pertain to self-expression, reimagined with the international style to represent the traditional characteristics of the Vietnamese people who have displayed high levels of resilience, and an ability to adapt to the cultural and socioeconomic transition in Vietnam.

Tulip Duong's artistic career had a turning point when the Museum of Ethnology in Hanoi held her first solo exhibition entitled Seasons of Lieu in 2005. In 2013, the artist continued to launch her exhibition “Windows” at the Vietnam Women's Museum and received accolades from both the public and critics. Some of Tulip Duong's works have been highly regarded and recognized, including Cat Linh Street (selected to be displayed at the Vietnam Fine Arts Exhibition 2002); Flower Vase at the Vietnam Fine Arts Exhibition in 2005, and four other works selected in the 20th century Vietnamese female painters and sculptors.

Tulip Duong has exhibited her works internationally at many prestigious exhibitions in Singapore, UK, Italy and Malaysia. Passionate about bringing Vietnamese contemporary arts to the world, she has cultivated productive relationships with curators and arts critics worldwide, including Ángela Molina.

Artist’s quote: There is no limit for everything in art!