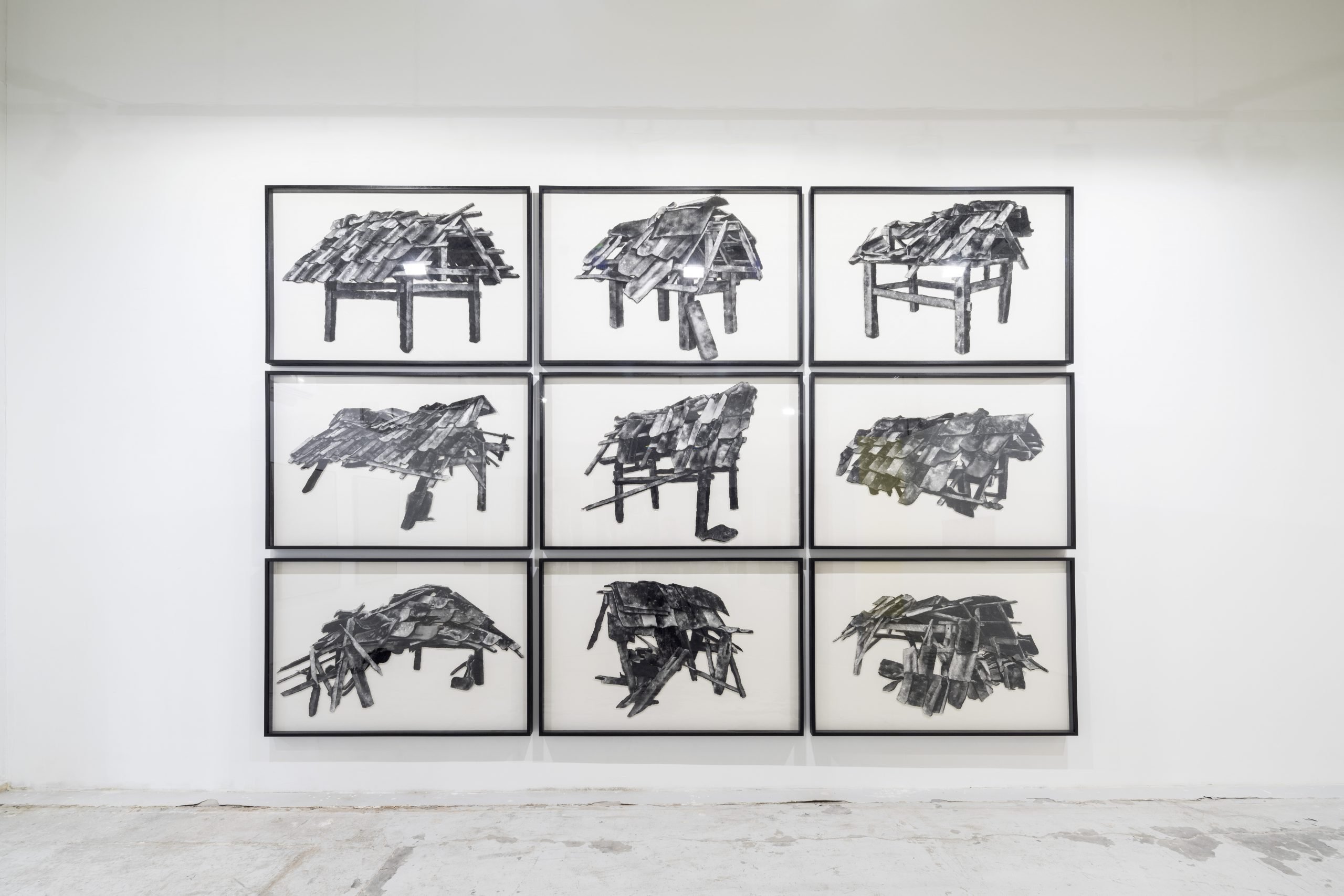 In the Javanese dialect, cungkup translates as “cover” or “sheath”, but more specifically it refers to an architectural structure that covers gravestones of any religious denomination.

Nadiah Bamadhaj came across these structures during her travels to small villages on the southern coast of East Java. In this series, she focuses on one type in particular that is made of wood and handmade ceramic tile, no bigger than a doghouse and only large enough to cover the gravestone. These cungkup ranged from newly made structures to disintegrated piles of rotten wood and broken tile. Her initial fascination with these structures had to do with their scale: In the East Javanese cungkup she had finally found an architectural structure whose scale denoted complete oppression. A house that was only big enough to squat in was seen as a metaphor for the complete subjection of the human form.

In her exploration of its design, and after several interviews with its custodians, Bamadhaj discovered other cultural conflicts that swirl around this simple structure. These conflicts have to do with the historical shifts in religious practice in Central and East Java, which began with animism and was then combined within the Hindu-Buddhist courts of the 9th century. In the 15th century, in order for Islam to take a foothold in Java, Kejawen was then folded into Islamic practice, and has since been defined as a kind of Folk Islam. Each gravesite custodian she interviewed was careful to site his position for or against mystical practice at his gravesite, and was quick to gossip about the levels of mysticism of other custodians.

These gravesites are thus sites in which diverse religious and mystical practices converge into and oppose one another, sites that speak to a wider political tug-of-war that had been developing in Indonesia since 2016. An example she conjures is the creation of Khilafah (translated as Caliphate), a form of government based on the tenants of Islamic practice, but steeped in a conversative, patriarchal, and discriminatory culture. In Khalifah, the artist sees no room for the mystical, the diversity of cultural intricacies and religious practice, and most importantly, for the tolerance of this diversity.

Her representations of cungkup in her installation of drawings carry a narrative of destruction. She chooses to depict an upright cungkup that eventually disintegrates further and further into a pile of rubble. For Bamadhaj, this is a sign of a threat, not only to the amalgamation of mystical culture and religious practice, but to the great tolerance such an example has embodied.

Nadiah Bamadhaj (born 1968, Petaling Jaya, Malaysia) resides permanently in Yogyakarta, Indonesia. Trained as a sculptor in New Zealand at the Canterbury School of Fine Arts, she creates collaged drawings of a specific technique developed over many years. Her repertoire also includes sculpture, site-specific installation, digital video and print. She has lectured in Fine Arts in Kuala Lumpur, written several articles and publications on human rights in Malaysia and Indonesia, received two grants from the Nippon Foundation’s Asian Public Intellectual Fellowship in 2002 and 2004, and is currently on the board of Yayasan Kebaya, a HIV/AIDS homeless shelter in Yogyakarta. In 2019, a survey book of 18-years of her artwork ‘Nadiah Bamadhaj’ was published by Italian-based SKIRA, and she was recently featured in ‘Vitamin D3: Today's Best in Contemporary Drawing’ published by London-based PHAIDON. Her artwork currently focuses on the social intricacies of life within Indonesian society, using figure, flora and fauna, batik motif, mythology, and architecture to articulate her observations. Bamadhaj recently participated in Jakarta Biennale 2021.