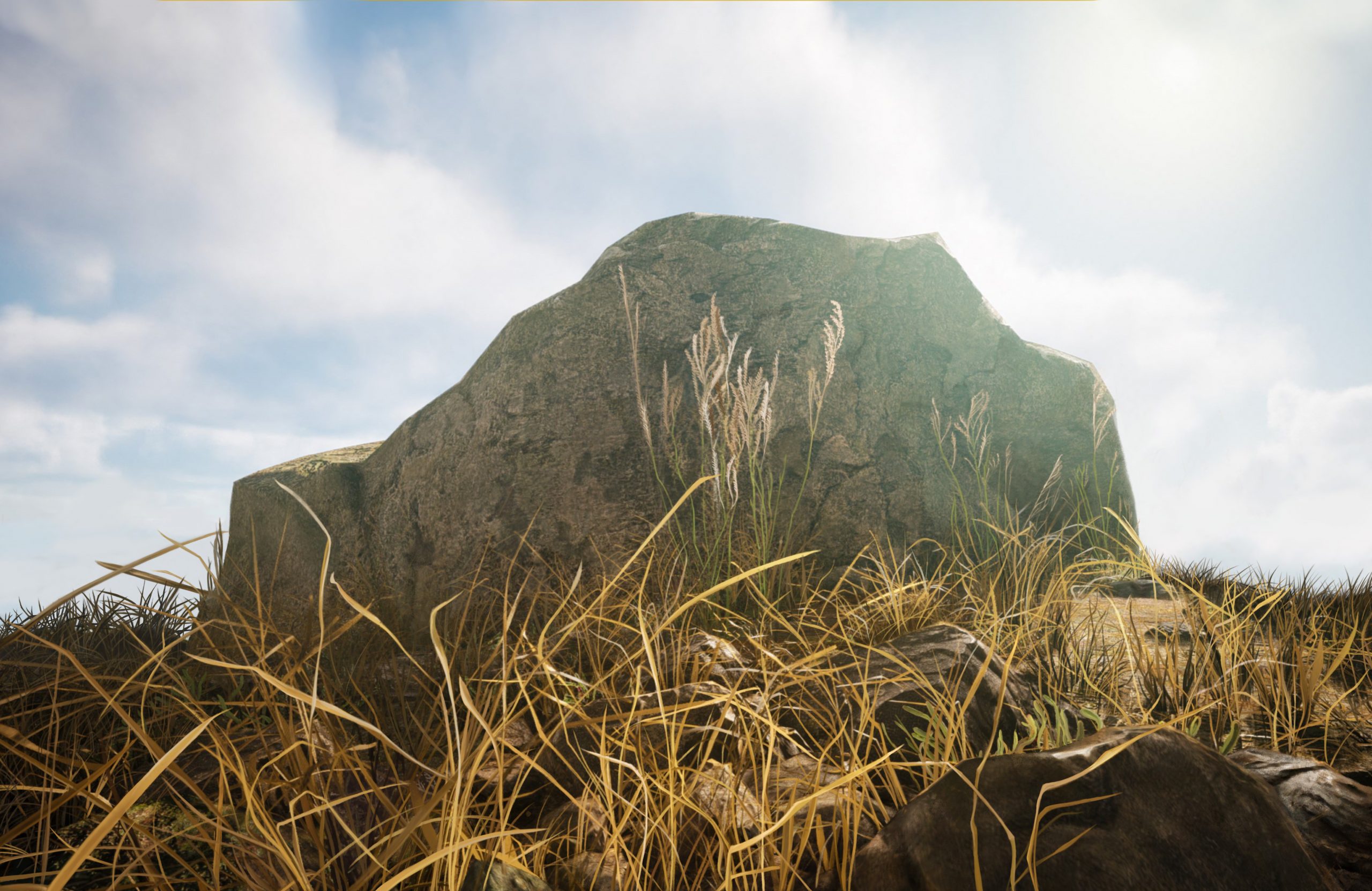 The Earth has a few,
And so has the Sky –
The Meadow, and the Eye –
But the Heart, and the Mind
Have the most of all –

In this poem, Dickinson describes the different ways in which one can find beauty in the world. Some beauty is found in the earth, sky, or meadow as seen by the eye, but the greatest beauty is found in the heart and mind. The poem celebrates the beauty of the natural world, and suggests that it can be found in many different forms and places not unlike No Man Land, a new series of works by Mary Pakinee, which invites audiences to see the artist’s perspective through landscape paintings that don’t necessarily convey the beauty of nature, but reflects the image within the artist’s heart. Mary is a Thai artist renowned for her realistic drawings, where the realism doesn’t stop at the form of the objects, but also the emotions and feelings that those scenes invoke.

No Man Land is a virtual world that Mary created using a program called Unreal Engine, a well-known 3D computer graphics game engine. She created a realm of nature filled with numerous types of flora, though the landscapes are products of randomized placements of 3D models of trees, leaves, flowers, rocks, pebbles, and even the sky, resulting in varied forms. The program acts as a chamber inside the artist’s heart, built from a blueprint within the program that allows audiences to walk, run, and listen to the ambient symphony of sounds within this virtual natural paradise, stretching out as far as the eye can see. The artist has also recorded some parts of No Man Land to produce a motion picture work under the same title.

Mary has constructed her very own “World Of Form Or Pattern”, a world created to her whims, but also allowing the algorithm within the program to generate details, objects, and landscapes of this world. The 3D models of flora are all imported from existing images online, which in turn simulate those found in the real world. In other words, they were created from recorded memories of an existing natural world, even though they paradoxically possess such perfection that it feels like these models themselves are the ‘mould’ that have physical characteristics that are ‘universal’, and with substance. The world of No Man Land that Mary created is a utopian one, with a perfect natural condition that wants for nothing.

Beyond her motion picture work, the artist concocted a digital painting based on the world of No Man Land. She has captured the perfection of that world, emboldening it with her drawing skills. Mary has spent considerable time exploring the world she brought into existence, a world so vast even the artist herself has yet to fully see all it has to offer. From there, the artist chose the views she held towards various objects that affected her emotions the most, transforming them into a series of 6 landscape paintings as part of this exhibition.

Among those is Some Rock (2022), an image that resembles a large mountain from afar. But upon closer inspection of the surrounding patches of grass, it is revealed that the image isn’t of a mountain, but a simple rock, captured from a low viewpoint, giving the object a sense of drama by making it seem larger than it is. Meanwhile, this image of a stone does not capture a particularly special stone; but as its name suggests, ‘some’ can mean an unknown or unspecified thing. As such, this image on a ‘rock’ carries the characteristic of being a ‘model’ of a rock. For the artist, this rock reminds her of the idiom ‘set in stone’, which is to say that the nature in No Man Land will remain flawless forever.

Another engaging aspect of Mary’s landscape paintings that diverges from traditional landscape drawings is while typical landscape paintings present a wide perspective, Mary much prefers to utilize close ups and close-range photography in her work, in order to emphasize the details of the image, rendering them more pronounced than how our eyes usually perceive. Meanwhile, these perspectives cannot be replicated in nature, such as Under Some Pond (2022), an image taken from the perspective of being underwater looking up, the floating logs and algae floating upon the surface. It is another reminder that we are looking at a perfect realistic image of nature, simulated in a virtual world. That artificiality isn’t derived from an imaginary world, but from otherworldly perspectives that deepen our understanding that we are looking upon scenes of artificial nature.

However, besides the uncanny points of view she has chosen to present, Mary has also manipulated several images; drawing over some while cropping out others based on her intuition in order to capture the beauty and grandeur of the natural world, as well as to convey a sense of place and atmosphere. The image Some Lake, Some Rock, Some Tree, Some Pond (2022) is therefore representational in a way that doesn’t just depict a specific location as it appears in reality, but is an illustration of a ‘model’ of a landscape that reflects the artist’s emotional state. The image of sunlight shining down on the stump of a large tree, little seedlings sprouting from its cracking bark, the shadow that reaches over a stream, a patch of grass breaking the water’s surface, with a mountain view in the background, etc.

The No Man Land exhibition is accordingly similar to an invitation for audiences to explore this natural world, a result of computer programs, additional embellishments by human hands and the artist’s immaculate emotions. This is a series of motion pictures and paintings that not only reflect the tranquil aesthetic of their creator, but this virtual realm of nature also compels us to contemplate the depths of our own hearts as audience members, as mentioned in the poem by Dickinson…

but the greatest beauty is found in the heart and mind.

Mary is an interdisciplinary artist who investigates the complexities of narrative, information consumption, and perception. She is interested in intimacy and humanity's relationship. She uses observation-based drawing and realistic techniques to create images and representation in stories.