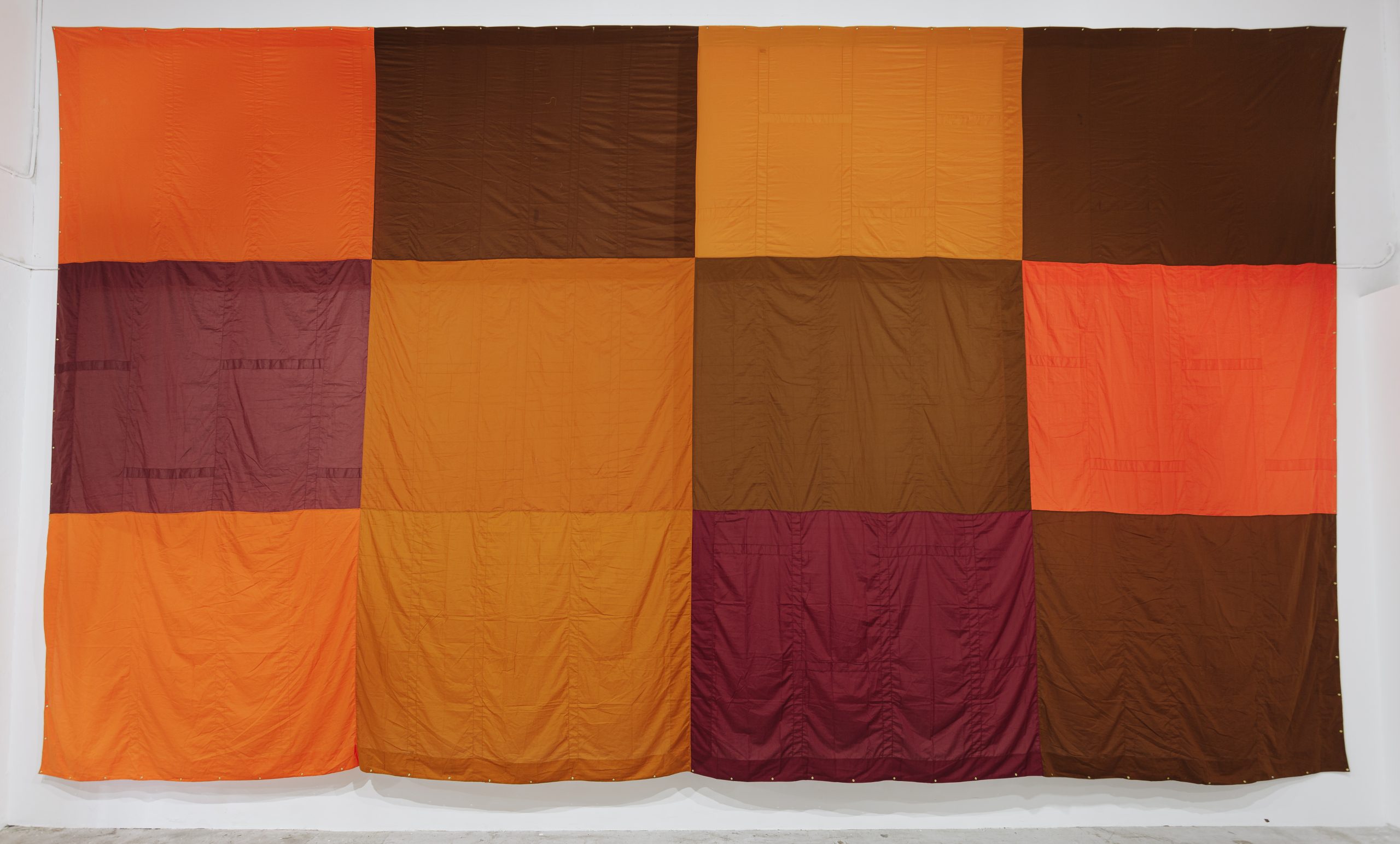 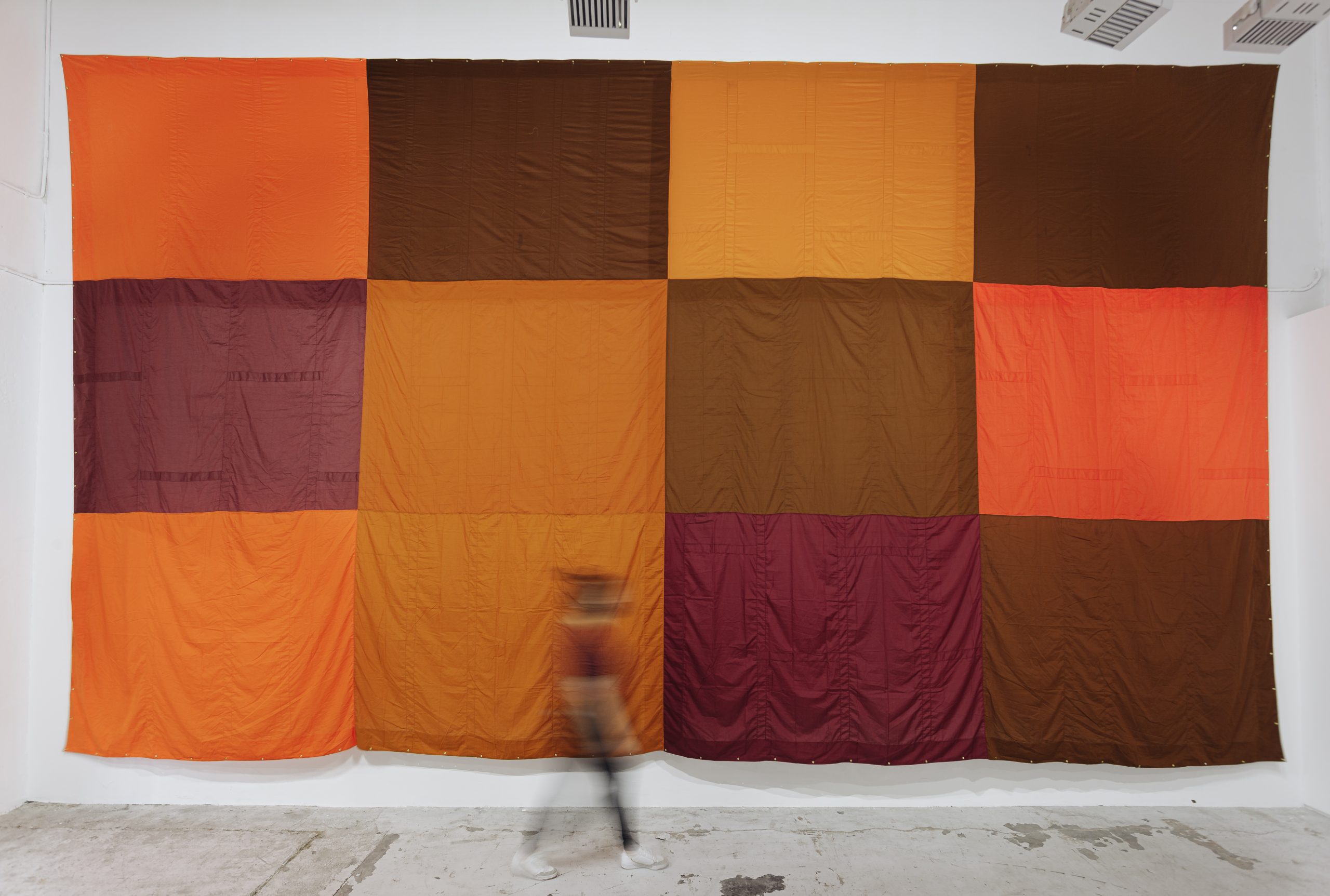 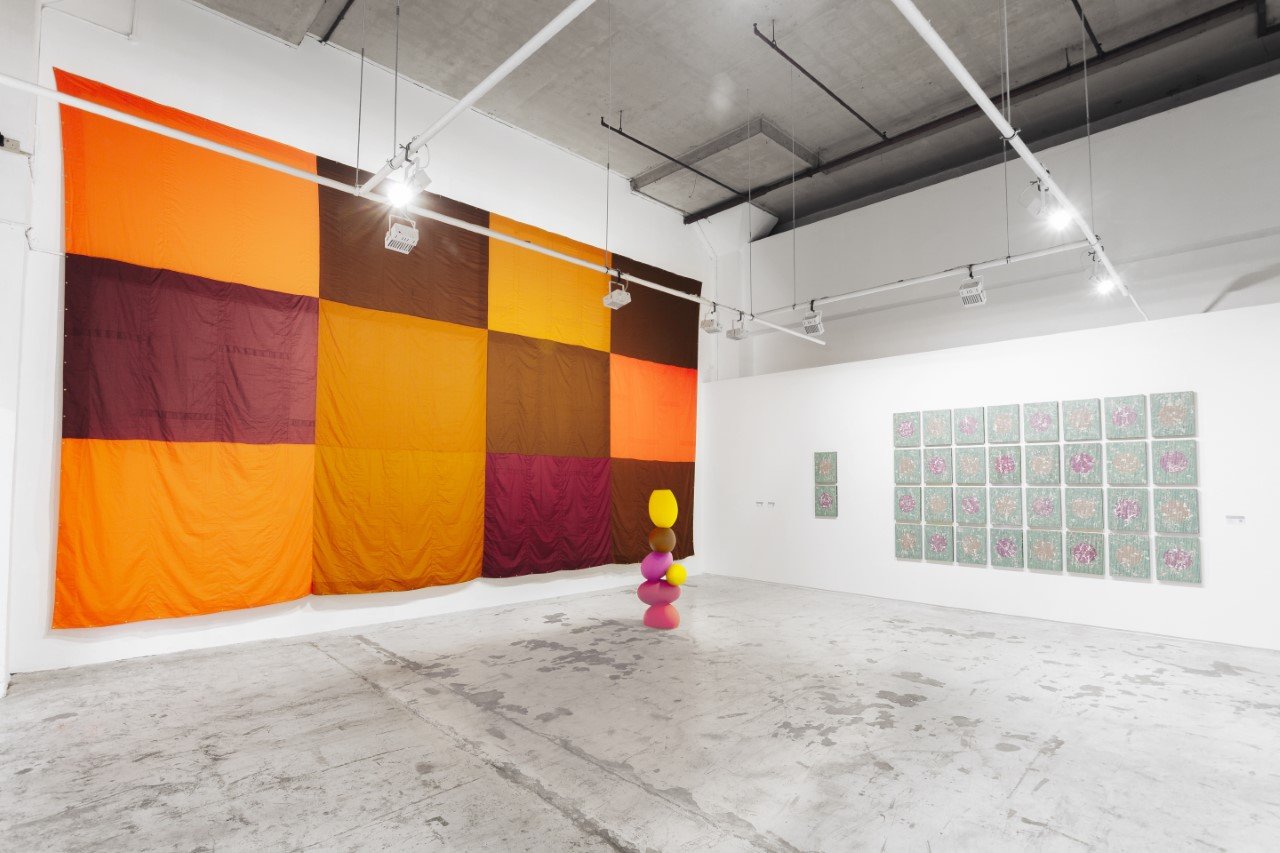 Rirkrit Tiravanija’s monumental, site-specific tapestry installation untitled 2016 (nothing) (2016) transforms the vibrantly tinted orange, brown and red fabric of Buddhist monks’ robes to shape a work that builds upon the philosophy’s concept of “nothingness” and examines spirituality, diversity and difference within the scope of equality, empathy and universality. Each dyed-fabric panel is unique in its tonality and connotes individual monks’ varying roles in the structure and hierarchy of the temple. The work is entirely site-specific and the artist creates the piece anew for the dimensions of the wall or space that it comes to adorn. When considered together, the patchwork forms a wall-filling assemblage that showcases the power of the cooperative.

For S.E.A. Focus Curated: hyper–horizon, we are delighted to present this work by Tiravanija in dialog with a sculpture by Tobias Rehberger entitled Mother without child 3 (2019). Throughout their careers, artistic peers and long-time friends Rirkrit Tiravanija and Tobias Rehberger have habitually returned to Southeast Asia, and particularly to Singapore, steeping themselves in the local environment and finding endless inspiration for their socially engaged practices in the region. We present work by the two artists that, when placed in conversation, prompt reflection on unity and collaboration, and recall previous projects by the artists in Singapore, highlighting their connection to and engagement with the region.

Rirkrit Tiravanija’s and Tobias Rehberger’s creative periods spent in Singapore are wide-reaching and multi-faceted. In 2014, Rirkrit Tiravanija was invited to STPI – Creative Workshop & Gallery in Singapore for the first time. Over the course of his residency he created the project Time Travelers Chronicle (Doubt): 2014 – 802, 701 A.D. which deconstructs, analyzes and journeys through time by means of a series of prints that employ handmade paper, reflective surfaces and thermochromatic inks. Both he and Tobias Rehberger were invited in 2017, to produce works that built upon collaboration between the artists. Tiravanija explored lithography and the use of limestone, while Rehberger employed colored paper and layers of silkscreen to shape abstracted texts. The following year, Tiravanija presented a site-specific rooftop installation at National Gallery Singapore. Entitled untitled 2018 (the infinite dimensions of smallness) (2018), Tiravanija’s work comprised a large-scale, traditionally crafted bamboo labyrinth with a Japanese tea house at its center. This tea house was the venue for Sunday tea ceremonies hosted throughout the exhibition.

Given this unique history of artistic production and inspiration for Tobias Rehberger and Rirkrit Tiravanija in Singapore, we are pleased to be able to connect with the region through this presentation with its call for reflection, collaboration and renewal.

Rirkrit Tiravanija will be presenting his works at neugerriemschneider and Gallery Side 2.